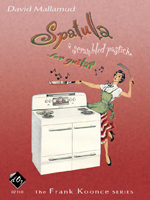 Composed by David Mallamud
Edited by Frank Koonce
Les Productions d'OZ
Spatula is an autobiographical homage to the guitar. Because the guitar is one of my favorite instruments, I wanted to write a piece that displayed some of the many diverse styles of guitar playing. I decided to begin by quoting one of my favorite classical pieces, Francisco Tarrega's Capricho Arabe, which appears in loose form in the introduction. But, whereas the introduction to Tarrega's piece leads to a beautiful, lulling, and mournful accompaniment figure in d-minor, Spatula leads to a fun and upbeat "banjoesque" bluegrass figure in D-major. This section soon makes way for a dramatic Cuban habanera, which in turn leads back to another bluegrass section. After more stylistic alternations, we arrive at what might be called (tongue-in-cheek) a "bluebaneragrass" section in which the two styles are merged. As things spin more and more out of control, the habanera is brought back alone with frequent and aggressive interruptions that eventually take over-- only to yield to a final bluegrass riff that concludes the piece. (Performance tip: Don't be afraid to frequently alternate plucks between the thumb and fingers as in folk and bluegrass "double-thumbing" styles.)

David Mallamud
David Mallamud has received awards from the American Society of Composers, Authors and Publishers (ASCAP), the American Academy of Arts and Letters, and Indiana University. He has been commissioned by the Westchester Philharmonic, the Elaine Kaufman Cultural Center (Merkin Hall), the New York Youth Symphony, the Albany Symphony, and the classical/rock ensemble "Dogs of Desire." He holds degrees from the Eastman School of Music (B.M.), Juilliard (M.M.), and Tisch School of the Arts at NYU (M.F.A.), and has done graduate studies at Yale.
Spatula: A Scrambled Pastiche The daftest thing about this piece is its title Spatula, which seems to have no bearing whatsoever on the musical content, which is in the form of a sort of pastiche, hence the sub-title. The music within is great fun, jolly hard to play correctly and easy to play absolutely wrongly if you get my meaning for there is a lot of detail here, which could easily be misread, and thus misplayed. The form of the work is very original and a real one-off, which immediately grabs one's interest. The composer describes the work as an autobiographical homage to the guitar and one in which he could portray many varied guitaristic elements that showed off the instrument to its fullest extent. So he begins with the introduction based on one of his best-loved guitar pieces, Tearrega's Capricho Arabe. It does begin exactly the same only gradually varying its little details as it goes further on, but as it winds down into what ought to be Tarrega's main section, you are suddenly dragged bodily into a banjo-esque bluegrass idea. This then makes its way after a little while into a habanera style, a violent contrast you may realize, only to accede to the bluegrass idea a little way on. From here on in things get a little bizarre as styles and moods change thick and fast but eventually become a somewhat bizarre mix of the two styles all at once! At this point there are various violent interruptions of rasgueado chords amongst other things that try to disrupt the entire affair, only to be met with dogged persistence on behalf of the habanera that refuses to give way. The section marked 'Grotesque' aptly portrays this battle, which, after all this is 'won' surprisingly by the bluegrass theme that one had almost forgotten about, and which slides in and takes over the coda to the astonishment of all concerned. Very difficult technically in a lot of places, this very humorous slice of the fantastic and bizarre is like nothing else I have come across before and as such would probably be the highlight of a concert should any brave individuals give it a try. Great stuff. -Chris Dumigan, Classical Guitar Magazine (UK), February 2010
(Spatula, as performed by Jorge Caballero)
Links