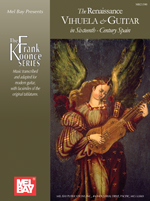 (Edited and Arranged for Modern Guitar)
Composed by Anthology
Edited by Frank Koonce
Mel Bay Publications
A substantial amount of early music for the guitar remains unknown to modern performers and audiences. In recent years, however, many fine musicologists, scholars, and performers of period instruments have provided a wealth of new materials--facsimile reprints, critical editions, translations of early treatises, and other resources--with which we may now begin to rediscover this music. Nevertheless, many may feel intimidated by the prospect of sorting through and learning to use such resources for the first time. For the uninitiated, just knowing where to start can be difficult. Scholarly editions, which serve different purposes than performance editions, are not often designed with the modern guitarist in mind. For instance, Renaissance vihuela and lute tablatures are usually transcribed with the open first string as G, not E. Most are presented in double-staff notation, a medium that is superior for realizing counterpoint but unconventional as guitar notation. Furthermore, these editions sometimes give idealized, but not realistic, solutions for voicing, note duration, and other matters that need to be considered within the limitations of our instrument. Guitarists who try to play from these editions essentially are faced with the task of transcribing the transcription! This 188-page anthology is designed as a companion volume to The Baroque Guitar in Spain and the New World (MB21122) and includes representative selections from the seven books for vihuela that were published in Spain between 1536 and 1576. As well as being fun and entertaining music for all to enjoy, these collections are intended to help bridge the gap between scholarly editions and performance editions by providing a hands-on introduction to tablature transcription and to issues concerning historically informed performance on the modern guitar.
Preface
Acknowledgements
1. Development of the Vihuela and Guitar
2. Tunings of the Vihuela and Guitar
3. Surviving Instruments
4. Reading and Transcribing Tabliture
5. Theory and Performance Practice
6. Editorial Procedures
7. Luis Milan

Duo, Fantasia 27, Tant que vivray, Con que la lavare?, De Antequera sale el moro, Fantasia 40, Fantasia 46, Fantasia 51
13. Esteban Daza
Fantasia 12, Fantasia 21, Fantasia 22, Nunca mas veran mis ojos
14. Facsimilies
15. Selected Bibliography
Plate 1. Painting: Valencian school, Virgin with Child and angel muscians.
Plate 2. Painting: Juan de Juans (1523-1597), Trinity with cherubs and angels.
Plate 3. Wooden carving: Angel playing a four-course guitar.
Plate 4. Engraving: The prophet Eliseus, Tres libros de musica.
Plate 5. Engraving: The "common" vihuela fingerboard.
Plate 6. The "Guadalupe" Vihuela.
Plate 7. The "Quito" Vihuela.
Plate 8. The "Chambure" Vihuela.
Plate 9. A vihuela or guitar (1586) by Belchoir Dias.
Plate 10. Frontispiece: Orpheous playing a vihuela, El Maestro.
Plate 11. Frontispiece: Arion playing a vihuela, Los seys libros del delphin.
Plate 12. Engraving: King David playing a harp, Tres libros de musica.
Plate 13. Engraving: Mercury playing a lyre, Tres libros de musica.
Plate 14. Cover: Enriquez de Valderrabano, Silva de sirenas.
Plate 15. Cover: Diego Piador, Libro de musica de vihuela.
Plate 16. Cover: Miguel de Fuenllana., Orphenica lyra.
Plate 17. Colophon: Los seys libros del delphin.
The Renaissance Vihuela and Guitar in 16th Century Spain For many years, vihuela transcriptions for the modern guitar meant that slim but earnest-looking volume published by Emilio Pujol in the early 50s. Needless to say, much has changed since Pujol's time and, with hindsight, it's easy to criticize him for the misleading introduction of rests, eccentric right hand fingerings, etc. But let's not forget that he and a handful of others were first on the scene, paving the way for scholars from the next generation and beyond. And let it also be remembered that Pujol was an advocate of the F# tuning long before it became standard practice. In this 2008 publication, Frank Koonce brings performance editions of the vihuela repertoire well and truly into the 21st century, with selected material from all seven principal composers for the instrument. Many items, including three out of the six Milan Pavanas and Mudarra's ubiquitous 'Ludovico' fantasia are already widely available, although the sections devoted to the later and lesser known vihuelists enter some worthy and relatively unexplored terrain. Miguel de Fuenllana enjoys a particularly generous share of the page count, with six instrumental items and two originally for voice and vihuela. However, the real strength of Koonce's publication lies in the accompanying text, which offers a copiously illustrated presentation of the instruments, their history and their repertoire. Of particular interest is the section on the relationship between the vihuela, the four-course guitar and the ensuing five-course guitar. Elsewhere, issues such as tuning, temperament and the realization of tablature are examined with a level of detail that belies the clarity of the language. I like to think I'm reasonably well-versed in this field, but don't mind admitting I learned a lot from what Koonce has to say. As for the transcriptions themselves, all is tidy and readable, the one downside of the largish staves being the occasional awkward page-turn. The F# tuning is applied to all the six-course vihuela pieces, and standard tuning to the two Fuenllana offerings for four-course guitar and five-course vihuela. Although period right hand techniques are discussed in the preface, right hand fingerings are wisely kept out of the mix. Left hand fingerings appear throughout and give every impression of having been thoroughly road tested. Quality renaissance fare presented to the highest standards. -Paul Fowles, Classical Guitar Magazine (UK) When I saw this book in the latest packet of items to be reviewed, I felt like a kid on Christmas morning. The repertoire for the vihuela has long been my favorite era of music, and works by Milan, Narvaez, and Mudarra have been a constant element of nearly every recital I have ever given over the last 35 years. Frank Koonce is a notable scholar, and this book of vihuela music enjoys the same lavish care and consideration his earlier book of the Bach lute suites offered. The present book is about as thorough and comprehensive a book as one could hope for in a publication aimed at the general public. There are thirty pages of introductory text, discussing the vihuela and modes and tablature and such, as well as another two or three pages each for all seven of the vihuela composers listed. (Quick test: can you name all seven? Answer: Milan, Narvaez, Mudarra, Valderrabano, Pisador, Fuenllana, and Daza.) This is clearly specified as a performance edition, not a scholarly edition (Koonce explains his definitions of each type). The music assumes the third string in F# tuning throughout, to keep the fretboard topography identical to the tablatures. Koonce also discusses the fact that many of the modern editions in standard guitar tuning result in mistaken voice-leading and incorrect note durations. There is a good mix of the well-known vihuela literature (Guardame las vacas by Narvaez, three of Milan's Pavanas, Mudarra's Fantasia after Ludovico) as well as many unknown works, including vocal pieces as well as solos. The book ends with facsimiles of the original tablatures for the various pieces offered in the book. Highly recommended, with hopes to see more similar editions in the future. -by David Norton, Soundboard
Links