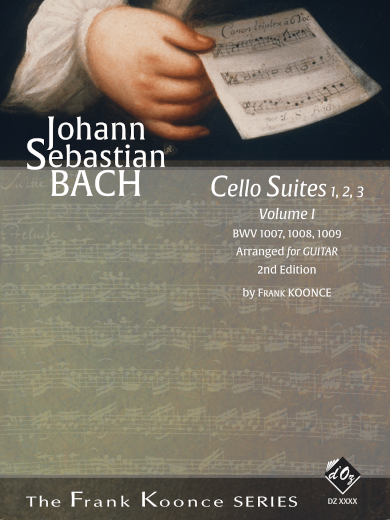 BWV 1007, BWV 1008, BWV 1009
Composed by Johann Sebastian Bach
Edited by Frank Koonce, 2nd Edition
Productions D'Oz
While preparing a guitar edition of Bach’s Sonatas and Partitas with my co-author Heather DeRome, it became clear to us that the type of hybrid notation ( compound-melody for the upper parts together with a fully-independent bass voice) would not be appropriate for many of those movements. In many places, there simply were not enough functional basses to realize an independent line without adding in an inordinate number of rests and extra notes. It was not our goal to re-write the music, but instead to support what was already there, only to the extent that it sounds idiomatic on the new instrument. Therefore, we decided to keep Bach’s original compound-melodic notation, which includes notes that also function as basses. Where additional basses and chords are used for harmonic support without being part of a melodic line, we followed Bach’s practice of aligning them vertically with the upper parts, but with separate stems, and not including rests except when needed to clarify the rhythm. These isolated basses typically are written with short time values, except at cadences, but may be sustained longer if desired and if technically possible. In preparing the second edition of the first three cello suites, I decided to return to this type notation.

We are very fortunate to have pieces within the standard guitar repertoire that are examples of how Bach adapted his string music for performance on the lute or keyboard. By following these models, and by studying Baroque compositional techniques in general, I am trying to follow Bach's own practices.
Links