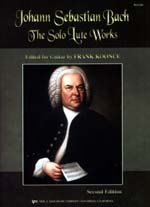 Edited and Arranged for Modern Guitar
Composed by J.S. Bach
Edited by Frank Koonce
Kjos Publications
An edition of music, like anything else, is a product of its own time. During the 1980s, guitarists of my generation were starting to become aware of stylistic concerns in the interpretation of early music. There was a movement towards stylistic authenticity, an attempt to re-discover the original intentions of early composers and recreate the aesthetic elements that were appropriate to their music. (Many style-conscious players today no longer think of being "authentic" - an unattainable concept - and prefer, instead, to use the term "historically informed.") This growing movement is what first prompted me to research the lute music of Bach and to develop my own edition of it. I tried to find performance solutions on the guitar that were as faithful as possible to the original music and to clearly delineate the necessary editorial alterations. In particular, I attempted to preserve the integrity and independence of Bach's original voicing. I believe that in this revised edition I have been better able to integrate the idiomatic qualities and limitations of the guitar into my transcriptions while still being faithful to the spirit and intent of the original. My goal is to blend scholarship with practical performance solutions for the guitar.
Preface to the Second Edition
Editorial Criteria
Reference Information
Sources and Historical Data
The Lute-Harpsichord
Aspects of Baroque Performance
Ornamentation
Embellishment
Stylized Dance Movements
Rhythmic Flexibility
Attempts to Regulate the Dot
Rhetoric and Affect
Articulation, Texture, and Voicing
Original Notation Symbols
Editorial Notation Symbols
Suite, BWV 997
The Face of Bach
Suite, BWV 997
Prelude, Fugue and Allegro, BWV 998
Eleven-course Lute
Prelude, BWV 999
Fugue, BWV 1000
Suite, BWV 1006a
Reading Manuscipt Sources
Facsimile Reproductions
(Prelude From BWV 1006a, as performed by Michael Cedric Smith on 'Celebrations')
Links